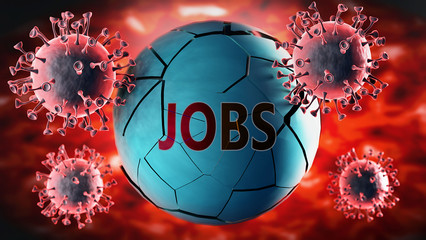 The September Labour Force Survey, released this morning by Statistics Canada, reflects labour market conditions during the week of September 13 to 19, six months after the onset of the COVID-19 economic shutdown. As Canadian families adapted to new back-to-school routines at the beginning of September, public health restrictions had been substantially eased across the country, and many businesses and workplaces had re-opened. Throughout the month, some restrictions were re-imposed in response to increases in the number of COVID-19 cases. In British Columbia, new rules and guidelines related to bars and restaurants were implemented on September 8. In Ontario, limits on social gatherings were tightened for the hot spots of Toronto, Peel, and Ottawa on September 17 and the rest of the province on September 19.

Employment gains unexpectedly accelerated in September, increasing by 378,200, more than double the consensus forecast on a broadly based pickup in hiring. This was the fifth consecutive month of job gains, which has now retraced three-quarters of the 3 million jobs lost during March and April. The unemployment rate fell from 10.2% in August to 9.0% in September. Most economists had expected a job gain of 150,000 and a jobless rate of 9.8%

Another piece of good news is that most of the net new jobs were in full-time work. The number of Canadians who were employed but worked less than half their usual hours for reasons likely related to COVID-19 fell by 108,000 (-7.1%) in September.

Among Canadians who worked most of their usual hours, the proportion working from home edged down from August to September, from 26.4% to 25.6%.

Employment increased in every province except New Brunswick and Prince Edward Island in September, with the largest gains in Ontario and Quebec.

As a result of the COVID-19 economic shutdown, the unemployment rate more than doubled from 5.6% in February to a record high of 13.7% in May. The 9.0% jobless rate in September marks a rapid improvement.  By comparison, during the 2008/2009 recession, the unemployment rate rose from 6.2% in October 2008 to peak at 8.7% in June 2009. It then took approximately nine years to return to its pre-recession rate. 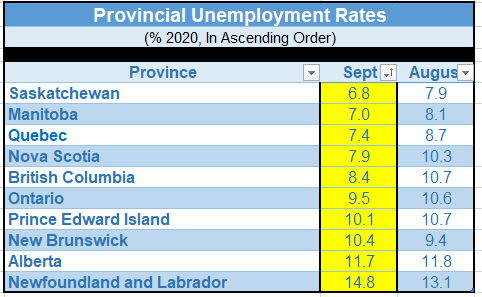 Employment in accommodation and food services rose by 72,000 (+7.4%) in September. This was the fifth consecutive monthly increase and brought total gains since the initial easing of COVID-19 restrictions in May to 427,000. Nevertheless, this industry's employment was the furthest from recovery in September, down 15.3% (-188,000) from its pre-pandemic February level.

The accommodation and food services industry is likely to continue to face many challenges over the coming months. While outdoor dining is likely to become impractical during the winter months and as some COVID restrictions are re-introduced, a recent study indicated that Canadians plan to reduce spending at restaurants.

Following four months of increases, employment in retail trade held steady in September. Compared with February, employment in this industry was down by 146,000 (-6.4%). After increasing sharply in May and June, following the initial easing of COVID-19 restrictions, retail sales slowed markedly in July.

In construction, a long road to recovery remains.

The pace of employment growth in manufacturing picked up in September (+68,000; +4.1%), following two months of modest growth over the summer. The September gains brought the total employment change in this industry to a level similar to that of February. While employment in manufacturing remained well below pre-pandemic levels in Alberta (-17,000; -12.1%) and to a lesser extent in Quebec (-15,000; -3.1%), employment was above the pre-COVID level in Ontario (+17,000; +2.3%).

Employment in educational services grew by 68,000 (+5.0%) in September, led by Ontario and Quebec. After declining by 11.5% from February to April, employment in the industry has increased for five consecutive months and has reached a level of 2.6% higher than in February.

As students returned to school in August and September, some jurisdictions increased staffing levels to support classroom adaptations. On a year-over-year basis, employment in educational services was up by 32,000 (+2.3%) in September, driven by an increase in elementary and secondary school teachers and educational counselors (not seasonally adjusted).

The labour market impact of the COVID-19 economic shutdown has been particularly severe for low-wage employees (defined as those who earned less than $16.03 per hour, or two-thirds of the 2019 annual median wage of $24.04/hour). From February to April, employment among low-wage employees fell by 38.1%, compared with a decline of 12.7% for all other paid employees (not seasonally adjusted).

Almost half of the year-over-year decline in low-wage employees in September was accounted for by three industries: retail trade; accommodation and food services; and business, building, and other support services industries.

The pandemic has disproportionately hit low-wage workers and youth, explaining why housing activity has been so strong. Low-wage employees and youth are typically not homebuyers or sellers.

Recently released data from the real estate boards in Toronto and Vancouver showed strong sales activity and significant further upward pressure on prices. In the GTA, a surge in new listings of high-rise condos meant that the upward pressure on home prices was driven by the ground-oriented market segments, including detached and semi-detached houses and townhouses. Home sales and new listing activity reached record levels in Metro Vancouver last month. The heightened demand from home buyers is keeping overall supply levels down. This is creating upward pressure on home prices, which have been edging up since the spring.

The CREA data for the whole country will be out on the 15th of October. This adjusts the price data for types of homes sold, giving us a better idea of how significant price pressures have been and in which sectors—more on that next week.