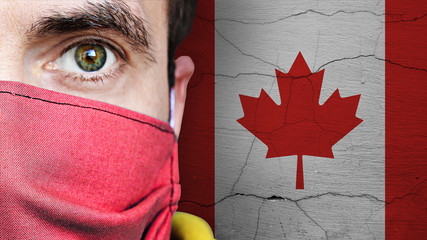 The hand-wringing about the Q1 GDP data released today misses the point that the data were actually better than expected. The Canadian economy declined at an 8.2% annualized rate in the first quarter, less harsh than the earlier estimate by StatsCan of -10%. Of course, every sector of the economy was hit by the enforced shutdown, but not by nearly as much as most economists anticipated. For the month of March, the decline was 7.2%, less dire than the -9% earlier estimate.

In light of the current unprecedented national and global economic environment, StatsCan is providing leading indicators fo economic activity. Their preliminary flash estimate for April is an 11% decline in real GDP. This estimate will be revised as more info becomes available, but the March and April decreases are likely to be the largest consecutive monthly declines on record.

The Economy Has Bottomed

It looks increasingly likely that we are already past the bottom of the latest economic downturn, with GDP potentially getting back on a positive growth trajectory as early as May.

That won’t be enough to prevent a historically large drop in Q2 output– likely multiples of the decline in Q1–but it would leave the data tracking along the more “optimistic” end of the -15% to -30% growth range estimated by the Bank of Canada in their last Monetary Policy Report. Government support programs for those losing work have been unprecedented–household disposable income actually edged up slightly in Q1 despite the large drop in overall economic activity, boosted by government transfers. With the decline in spending in March and April and the rise in disposable income, the savings rate is soaring. All of us are saving money by doing our own cooking and cleaning. We aren’t travelling and shopping is certainly limited, not to mention the savings on gasoline, entertainment, hairstyling and gym memberships. Hopefully, this could provide a cushion to support spending and the economy will turn sharply higher in Q3.

Still, the three million jobs lost over March and April will not be recouped quickly. The lockdown is easing only gradually, and any activities requiring large gatherings–think tourism, conferences, concerts, movies and sports–will remain closed until there is a vaccine or effective treatment. We expect things will begin to get better from this point, but still look for the unemployment rate to remain elevated at 8.5% in Q4 of this year. It is currently 13%. 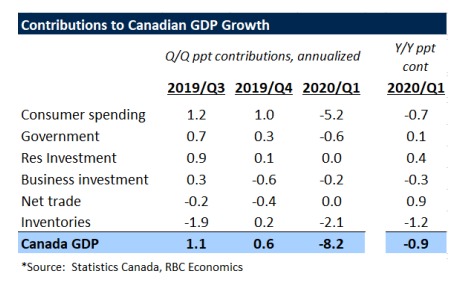 Much has been made of the recent CMHC Housing Market Outlook report released this week. The gloomy outlook of up to an 18% drop in home prices, a delayed recovery not until 2022, and a 20% arrears rate garnered headlines. First-time homebuyers were warned that housing was no longer a good investment, at least not over a three-year horizon. But the CMHC’s own data shows that home prices have risen an average of 5% annually over the past twenty-five years. And though no one’s retirement nest egg should consist solely of their residential real estate, a home is one of the few investments that you can actually use. People buy homes for many reasons well beyond wealth accumulation. The pride of ownership and lifestyle choice dominates the decision to buy for many.

Also this week, the Governor of the Bank of Canada suggested that the doomsters were overly pessimistic and asserted his view that the economy would recover from its medically induced coma much faster than the pessimists were suggesting. Clearly, none of us have a crystal ball, nor have we ever before experienced a pandemic recession. While we rise from the abyss, the pain may well be far from over. People are still losing jobs and many businesses continue to sink. Any recovery is dependent on whether the virus cases keep slowing and whether there is a second wave of infections.

But oil prices have risen sharply, a major boon for Alberta and some high-frequency data have improved. The stock market is well off its lows, interest rates have fallen sharply and the qualifying rate for mortgage stress tests has fallen to 4.94%. Actual mortgage rates are near record lows and are likely to remain low for the foreseeable future.

In time, immigration to Canada will restart, and foreign students will return. New businesses are blossoming even now and many sectors will continue to advance. To name a few, we are seeing burgeoning growth in telemedicine, artificial intelligence, big data analysis, cloud services, cyber-security, 5G, home entertainment, virtual everything, home fitness, DYI renovations, indeed, DIY anything.