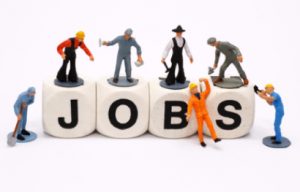 The employment report is the lone bright spot in an economy that has slumped across the board. According to today’s jobs report from Statistics Canada, the economy added 55,900 net new jobs last month, all of them full-time positions. This is the second consecutive monthly job surge for an economy that has barely grown in the past five months (see chart below).

The two-month accretion is the best start to a year since 1981. Canada’s economy has added 290,000 jobs since August, the most substantial six-month rise since the early 2000s. Moreover, there are still a half-million job vacancies which continue to attract foreign workers.

The Canadian dollar shot up on the news, bouncing back from its plunge on Wednesday when the Bank of Canada signalled that the widespread weakness would keep the Bank on the sidelines for longer than expected.

In a speech yesterday, Deputy Governor Lynn Patterson said policymakers spent “a lot of time” in policy deliberations discussing four-quarter output data that she said were weak in certain areas — citing business investment, housing and consumption. The soft data mean the economy will probably be weaker in the first half of this year than the Bank of Canada had been anticipating as recently as January, Patterson said. She characterized the data picture as “mixed” and said the economy is likely to rebound later in 2019, boosted by the robust labour market. In January, the Bank of Canada forecasts a rebound in the second quarter of this year.

The employment gains in recent months come amid an otherwise dismal performance for the economy amid stresses in the oil sector, weakening housing markets, diminishing trade prospects, volatility in global financial markets and waning consumer and business confidence. Economists were forecasting an employment gain of just 1,200 in February. 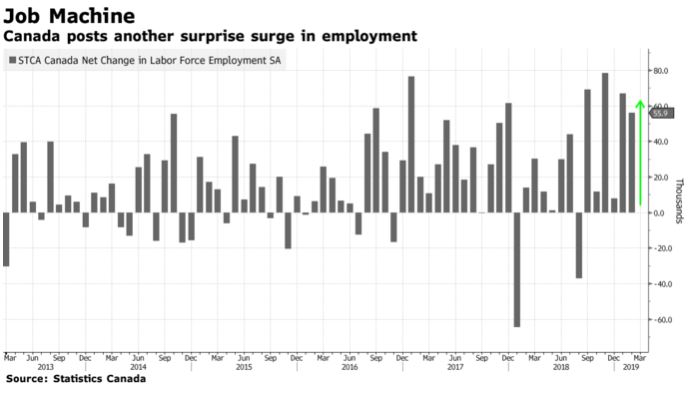 The unemployment rate in February was unchanged at 5.8% as the number of people searching for work held steady. The strength, however, was not widespread across the country. Ontario was the sole province with a notable employment rise last month while the jobless rate was unchanged as more people were looking for work. Net new jobs declined in Manitoba and were little changed in the remaining provinces.

Even the wage picture is improving. Annual average hourly wage gains accelerated to 2.3% last month from 2% in January, with pay for permanent employees up 2.2% compared to 1.8% previously.

Bottom Line: The Bank of Canada will remain on hold until the strength in the labour market filters into consumer and business spending. The headwinds of global uncertainty, energy market weakness and the housing slowdown contribute to the Bank’s cautious stance. The Canadian trade gap hit a record high in December, reported earlier this week, almost entirely due to the collapse in crude oil prices. It was a fifth straight monthly decline in Canadian exports. Also, the US tariffs on steel and aluminum exports continue to weigh on the economy. It appears there is little prospect that the renegotiated Canada-Mexico-US trade deal will be confirmed by the US Congress this year, adding to the uncertainty. 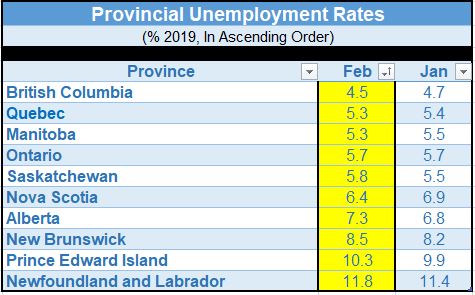 Sherry is an award-winning authority on finance and economics with over 30 years of bringing economic insights and clarity to Canadians.